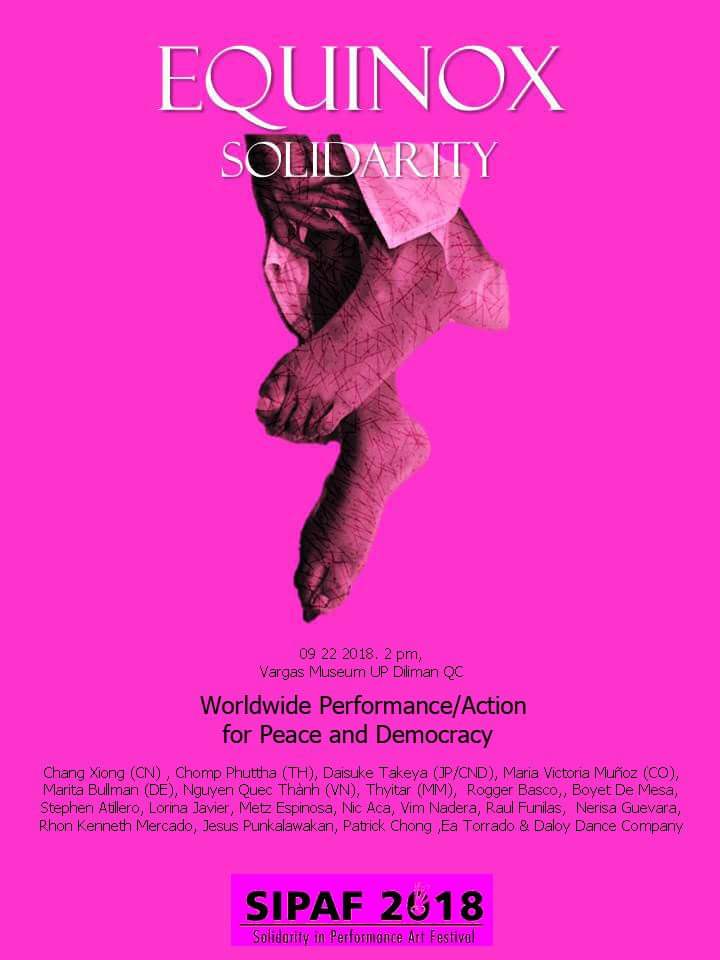 On behalf of individual artists, artists’ groups and Arts organisations around the world, we want to
declare the September Equinox, from this day onwards, as the International Day Of Public Action.
We advocate this day as a worldwide celebration of Freedom and Democracy and are sending a
letter to the United Nations (UN) to officially recognise this day, in support of these principles. Also,
copies of this letter will be sent to all major world religious leaders to have their support included in
our endeavour.
At the Bbeyond symposium Being in Public: Encounters – Outside Place and Inner Space, in
Belfast, April 2017, Chumpon Apisuk proposed that this Day of Public Action would also include
members of the public who agree with these principles, that it shouldn’t be limited to artists, but
that artists need to instigate and facilitate it.

He wrote:
“It is the day that all states must recognise and allow actions from the people which are ‘peaceful’
and ‘non-violent’. This day of action can be with or without context, but for the recognition of all
people’s rights to share the public space together, in solidarity with each other, in respect of each
others rights to share the same public space, as well as the time.”

We understand that the words, Freedom and Democracy have resonances way beyond their respective
significations and meanings, which vary from person to person and country to country. We
are interested in how these words can be translated in people’s lives as lived philosophy in action
and not just to remain as thoughts and ideas. We propose the September Equinox to be a day of
action and reflection for Freedom and Democracy.
We would like the multiplicity of these actions in our respective countries to be acknowledged by
the UN to act as solidarity, to be the commonwealth of and for the people. The idea that this day
could represent a unity of purpose through action and reflection can help bring real meaning to
peoples lives. Words are not just empty signifiers, but through respective individuals, can bring
about positive change and hope for those unfortunate enough not to have access to these ideals.
Freedom of thoughts, words and deeds is not a licence to do as one pleases, but is about respect
for oneself and others through the ideas and operations of Democracy. Democracy gives power to
people to have Freedom in their lives – a potential commonwealth for all people.
This action is dedicated to those fellow artists and others who cannot take part for ‘political’ reasons.
We understand that some who would want to support these principles cannot because of
political circumstances in their countries. Those principles are dedicated, through these actions, in
solidarity with their plight.
While not wanting to single out any of the world’s great ‘state’ persons who have articulated and
demonstrated these ideals, Gandhi’s words, “Be the change you want to see in the world” , offer a
good place to start from.